Susan B. Haynes consecrated as bishop of Southern Virginia 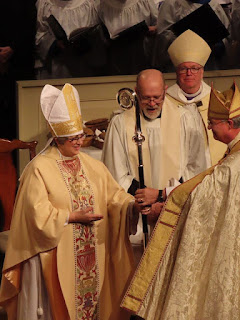 The Rev. Susan Bunton Haynes was ordained and consecrated as the 11th bishop of the Diocese of Southern Virginia at 11 a.m. on February 1 at Williamsburg Community Chapel in Williamsburg, Virginia. Approximately 1,300 people attended the historic service, and over 1,000 watched the live stream, as Haynes became the first woman bishop in the diocese’s 128-year history. Presiding Bishop Michael Curry led the service as chief consecrator. The Rt. Rev. Edward S. Little II, seventh bishop of Northern Indiana, was the preacher.

Haynes was elected at a Diocesan Special Council in Dinwiddie, Virginia on September 21, 2019. One of six nominees, she was elected on the eighth ballot. Prior to the election, Haynes served as the rector of St. Paul’s in Mishawaka, Indiana, for 11 years.

The service, held on the Eve of the Presentation of Our Lord Jesus Christ in the Temple, began with a Candlemas ceremony by candle light. Congregants held candles blessed at the Church of the Holy Sepulchre in Jerusalem especially for use at this service.

A hymn written especially for the consecration by the Rev. Canon Henry G. Randolph, Jr. was sung during Communion.  Randolph’s text is set to the tune Kingsfold, a well-known tune from The Hymnal 1982. Randolph, a friend and colleague to Haynes, is also distantly related to The Rt. Rev. Alfred Magill Randolph, the first bishop of Southern Virginia.  The hymn was also shared with parishes in the Diocese of Northern Indiana, from which Haynes came, in order to be sung on February 2 during worship, as their way of supporting a priest from their own diocese who has become bishop.

Haynes earned her Master of Divinity degree at Vanderbilt Divinity School and was ordained in 2004. She is married to the Rev. Thomas Haynes, and they have two adult daughters, Sarah and Avery.

Haynes succeeds the Rt. Rev. Herman Hollerith IV who served as the 10th bishop of Southern Virginia, who served the diocese for 10 years, retiring in January 2019.

The Diocese of Southern Virginia encompasses 101 congregations from Virginia’s Eastern Shore to the Dan River.

Posted by Diocese of Southern VA at 11:14 AM