The Mission of the Holy Spirit is seeking the donation of a few laptop computers for kids who are looking at colleges and applying for jobs. If you have a good, used laptop you can donate, please contact the Mission at info@missionoftheholyspirit.org.
Posted by Diocese of Southern VA at 7:08 AM

Posted by Diocese of Southern VA at 4:22 AM 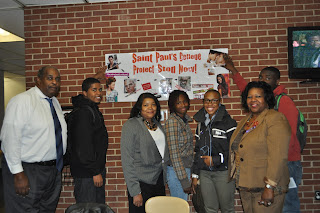 Posted by Diocese of Southern VA at 11:47 AM

Are you an Episcopal youth, or know one who would like to learn about the governance of the church while providing a needed service? Then consider the Episcopal Youth Presence at General Convention 2012. Eighteen positions, representing two from each Province of the Episcopal Church, are opened to youth to participate in the 77th General Convention, scheduled for July 2012 in Indianapolis, Indiana July 5 to July 12. Click here for more information. Interested youth may apply or be nominated by an adult. To be eligible for one of the 18 positions, the youth must:

The Leadership Program for Musicians will offer their Spring Workshop on March 10, 2012. This year's workshop is Music that makes Community. Music that Makes Community is a movement in the church, rekindling an ancient practice of singing - a way of music making that has been central to folk traditions for centuries. It is simple, faithful and traditional. Singing without the use of books or screens, rather relying on human to human communication, creates community in a powerful and unique way. This workshop will explore ways to incorporate this kind of singing into our regular liturgies, as well as stretching some boundaries. A wide variety of music will be sung and basic techniques for leading will be introduced. This one-day workshop will be held at Church of the Holy Comforter in Richmond. Fee is just $75. Click here for more information on the LPM and the workshop.
Posted by Diocese of Southern VA at 11:43 AM

Gather together with other adults who work with youth for a time of reflection, resource sharing and refreshment. Try out new activities and worship for use with your youth group and problem solve common issues in youth ministry. Cost is $50. Register by Jan. 16. Find more information on our Youth Events page.
Posted by Diocese of Southern VA at 6:20 AM 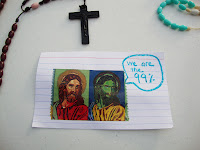 by Bob Kinney, Episcopal Peace Fellowship
Austin, Texas – Seminarians here are “taking the Gospel to the streets” as an interfaith chaplaincy ministry to those participating in Occupy Austin.
“I am proud of the campus chapter of the Episcopal Peace Fellowship (EPF) at the Seminary of the Southwest. They are taking the Gospel to the streets and exemplify the growing influence young adults are having in our nation-wide social justice work,” said the Rev. Jackie Lynn, EPF executive director.
Several seminarians – some donning monkish robes – went to the downtown Austin Occupy site the Monday before Thanksgiving to pass out food and pray with the Occupiers. Their first weekly Sunday prayer service was held at the site six days later.
Liz and Roger Hungerford, a couple who came to the seminary from Emmanuel in Virginia Beach, are taking part in the chaplaincy ministry.
The Episcopal Peace Fellowship’s website – www.epfnational.org – has an article written by Erin Warde, a seminarian from the Central Gulf Coast, about her group’s first day in Occupy Austin.
“Using the diocesan-supported Occupy chaplaincy in Boston as an example, I thought our EPF chapter on the seminary campus could prayerfully participate in Occupy Austin,” said Jessie Vedanti, chapter president, member of the EPF’s national executive council and third year divinity student from the Diocese of Olympia.
“Many seminarians began talking on campus about the church’s role in economic and social justice and we welcome students from other Austin seminaries, as well as the wider faith communities in Austin,” said Vendati, who was a Catholic Worker in Tacoma, Wash., before entering seminary in Austin.
While Union Seminary in New York City supported their students participating in Occupy New York City, “we are the first Episcopal seminary to take part in the Occupy Movement. Many faculty and our academic dean have been very supportive as we honor the legacy of our seminary’s founder,” Vendati said.
The late John E. Hines, elected Presiding Bishop of the Episcopal Church in 1964 and a compelling advocate for racial and social justice, founded the Episcopal Theological Seminary of the Southwest when he was bishop coadjutor of Texas after World War II. “A leader of iron nerve, integrity and conviction, (he) courageously guided his church through a turbulent decade,” wrote the Rev. Ken Kesselus in his book John E. Hines – Granite on Fire.
Posted by Diocese of Southern VA at 6:17 AM