There is at least one U.S. congregation that was excited to read the article posted from Rome dated October 5, 2016, stating that Pope Francis and Anglican Archbishop Justin Welby of Canterbury charged 19 pairs of Catholic and Anglican bishops to return to their home countries and work together to promote joint prayer, joint proclamation of the Gospel, and especially joint works of charity and justice.  The excitement was there because for the last 39 years, that has been the mission of the Church of the Holy Apostles in Virginia Beach, Virginia.

Founded November 1, 1977 as a joint assembly of Roman Catholics and Episcopalians, Holy Apostles has worked diligently to promote ecumenism in the Hampton Roads area of Virginia, the State of Virginia and beyond. As longtime members will tell you, “Many verbally promote ecumenism, but we live it every day, and in everything we do.”

Our vision of mission is Walking the Faith of Christian Unity. Members are reminded that Holy Apostles is a unique community of Christians who are entrusted with a vision of God’s uniting action in His people. Holy Apostle members understand they are called to a new venture in the history of the Church. Members are called to be living signs of the Church’s efforts toward organic unity and to promote ecumenical ventures among Christian bodies. They see themselves called to share the gifts of ministry with one another and to be channels of God’s love in the world through ecumenical involvement with other Christians.

Holy Apostles members are committed to build community by discovering the wants and needs of those of other traditions of Christian faith through calling members to share their gifts freely and to grow – by nurturing their faith and tradition and by celebrating renewed life together in worship and fellowship. Members of Holy Apostles commit themselves to spread the Good News of our life in Jesus Christ, who calls us into oneness.

This vision is expressed mainly through a mission of ecumenism, which includes participation in local efforts, in the activities of LARCUM (the acronym for the Lutheran, Anglican, Roman Catholic, and United Methodist Covenant – signed by all the bishops of Virginia from the four traditions) and in national offerings.  Holy Apostles was also an early member of the local organization originally called CUMLEGO (Catholic, United Methodist, Lutheran, Episcopalian and Greek Orthodox), which is now called the Christian Unity Network and seeks an expanded platform for ecumenical offerings. The vision extends to interfaith ventures as well.


The vision is expressed locally especially through social justice ministry outreach, which includes utility assistance and food distribution support from Holy Apostles’ own food pantry. The church also serves as a pick-up site for local residents from a mobile food pantry sponsored by the Foodbank of Southeastern Virginia.  The community supports and houses homeless families for a week during the summer while joining a nearby larger Presbyterian parish in their winter support of the homeless.  This is in addition to collecting diapers, funding special needs, supporting “pennies for prescriptions,” school supply drives, and Lenten Rice Bowl efforts (where proceeds go evenly to the Catholic Relief Agency and the Episcopal Relief and Development Relief Agency).

Church of the Holy Apostles has been highly honored for upholding Christian unity and dialogue with other faith groups. In July 2006 the American Association of Interchurch Families presented the community with the Ecumenical Vision Award.  The Virginia Council of Churches bestowed the Faith in Action Award in May 2007. In 2009 Holy Apostles was given the Institutional Award by The Rumi Forum, a Washington, D.C. faith-based group founded in 1999 to foster interfaith and intercultural dialogue. 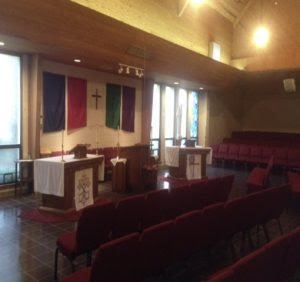 From the beginning, the founding Episcopal and Roman Catholic co-pastors insisted that everything would be handled equally between the two traditions. The governance is called the Vestry Council—“Vestry” from the Episcopal model and “Council” from the Roman Catholic parish council model. The Vestry Council is run by a Warden (Episcopal) and a President (Roman Catholic).  There are six members of each denomination on the Vestry Council and terms are staggered so an equal number of Episcopalians and Catholics are up for election each year, to serve three year terms.  A Catholic member and an Episcopal member serve as liaisons to the major committees, which in turn, have committee co-chairs of one Catholic and one Episcopalian. The Sunday Eucharistic Services are held sequentially, but with little time lost between services. Many of the attendees are interchurch families. Most individuals and families who attend worship stay for both services.  An offering is taken up at both services, but the amount collected is for the support of the whole community, not segregated based on the amount collected at each service. 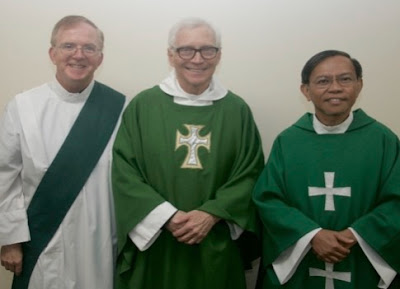 Holy Apostles currently has an interim Episcopal Co-pastor (half-time), a Catholic Chaplain (celebrating Mass on Sundays) and a Catholic deacon (quarter-time) serving as Senior Pastoral Associate. Although the clergy and congregation are predominately from the two traditions, the pastoral team takes a holistic approach to ministering to the entire congregation. Since we have some restraints imposed regarding the Eucharist, we plan other joint, non-Eucharistic worship services such as healing services, Thanksgiving services, an Advent Festival of Lessons and Carols, and other various occasions, providing us with opportunities to worship and pray in unity.

In addition to Holy Apostles being known for its ecumenical and social outreach, it also has an exceptionally strong adult faith formation program that is well attended following Sunday services.  The Adult Faith Formation Committee also brings in nationally known speakers from a variety of backgrounds and invites those from other churches to attend.

Holy Apostles is documenting its journey in its monthly newsletter entitled ARChives. It is a journey that has had its up and downs, but a journey worth taking!  Members of Holy Apostles choose love over division, unity over separation, and Christ above all things.
Photos:
Sanctuary view of the two altars and ambo
Deacon Gary Harmeyer, Episcopal priest the Rev. Alan Mead, Catholic priest Father Rene Castillo

Posted by Diocese of Southern VA at 12:02 PM